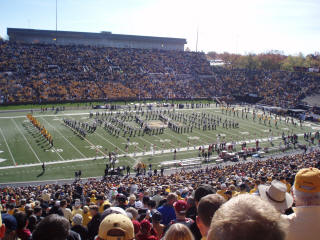 Memorial Stadium offers a wealth of atmosphere. Driving along Stadium Boulevard, parked cars are lined up for miles creating a pathway to the stadium. Welcoming fans into the arena is a large statue of Don Faurot for whom the field is named. Faurot coached at Missouri and left a great legacy during the mid 1900s. As a recently anointed SEC member, Tiger fans are anxious to compete on a consistent basis in this juggernaut conference.

Pregame sets a fantastic scene inside the stadium. After the band spells out “MIZZOU” and “TIGERS” out on the field, a “MIZZOURAH!” cheer is exclaimed in booming unison. The team charges out onto the field through billows of  smoke with a canon sounding and Truman the Tiger’s appearance on a vintage 1950s fire truck. Truman rolls over to the students while a large flag bearing the letter “M” is unfurled  into the student section. There aren’t bad seats in Memorial Stadium – many fans even opt to lay out a blanket and sit on the hill at the north end of the stadium. It is on this hill that rests a college football landmark – drawn out in large white rocks is the letter “M” that’s the beacon of Faurot Field.  The hill contributes to the coziness of this classic venue.

Missouri’s induction into the SEC has seen some success with a trophy case that boasts an SEC east title. But, that has only whetted the appetite for more. Despite some growing pains, one can hear fans whistling along to the fight song that plays over the radio in the Tiger Team store connected to the stadium. As the third quarter ends, fans sway to the Missouri Waltz, continuing to form the bond with their university and state. The entire experience at Missouri is captivating, and the stadium typifies traditional and festive college football atmosphere.