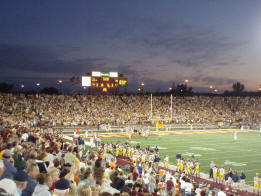 Central Michigan University is an unexpected surprise hidden among the nothingness in the middle of Michigan. Driving into Mount Pleasant provides immediate clues that you have arrived onto a college campus. Folks decked in maroon and gold trickle around the area and it all flows toward Kelly Shorts Stadium where just outside awaits a massive party in preparation for game action. Live bands, loud music, dancing on trucks, and other common college behavior electrifies the area around the stadium. It’s a concentrated gaggle of young adults crammed together making it difficult to walk through and get to the stadium.

Along with the students, fans hover all around the stadium tailgating, tossing footballs, and watching the band pound toward the stadium. Kelly Shorts Stadium is smaller like most MAC stadiums, but it is powerful with its newer additions and gorgeous new replay scoreboard. Unlike most MAC stadiums, one entire side of Kelly Shorts is enclosed keeping sound in and providing a bit more unity to the arena. In addition, the fans are serious about their team. The student section rivals that of some major conference stadiums I have attended. They are loud, vocal, and in sync with the game. Central fans love their team and the Chippewa community supports the university, as well. Therefore, the mascot name has little threat to be challenged and changed. Kelly Shorts Stadium does not disappoint. It’s one of those hidden gems in college football that may not be televised every weekend or written up in newspapers across the country on a daily basis, but its atmosphere truly adds to the heartbeat of college football.