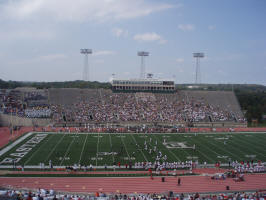 Lost between the shadows of Michigan Stadium’s 111,000 seat “Big House” and the metropolitan area of Detroit, Rynearson Stadium sits quietly off the campus of Eastern Michigan University. With the Wolverines only ten minutes away, EMU really gets lost in the shuffle. It’s almost like a gathering place where fans who couldn’t get a ticket to the Michigan game can chat about the Big Ten.

The stadium is an adequate size for a MAC school, but needs consistent winning in order to fill the bleachers up.  As a result, some of the tailgating and fanfare lacks a bit, too. But, attempts are being made to heighten the Rynearson Stadium experience. They have a beautiful convocation center bordering the south side of the stadium. They have replaced the green playing field with a unique gray surface, making them one of only two (with Boise State) to have this feature. It doesn’t automatically equate to a flood of support, but this beautiful setting encompassed by Michigan’s tree drenched landscaping makes for a college football home with lots of potential.