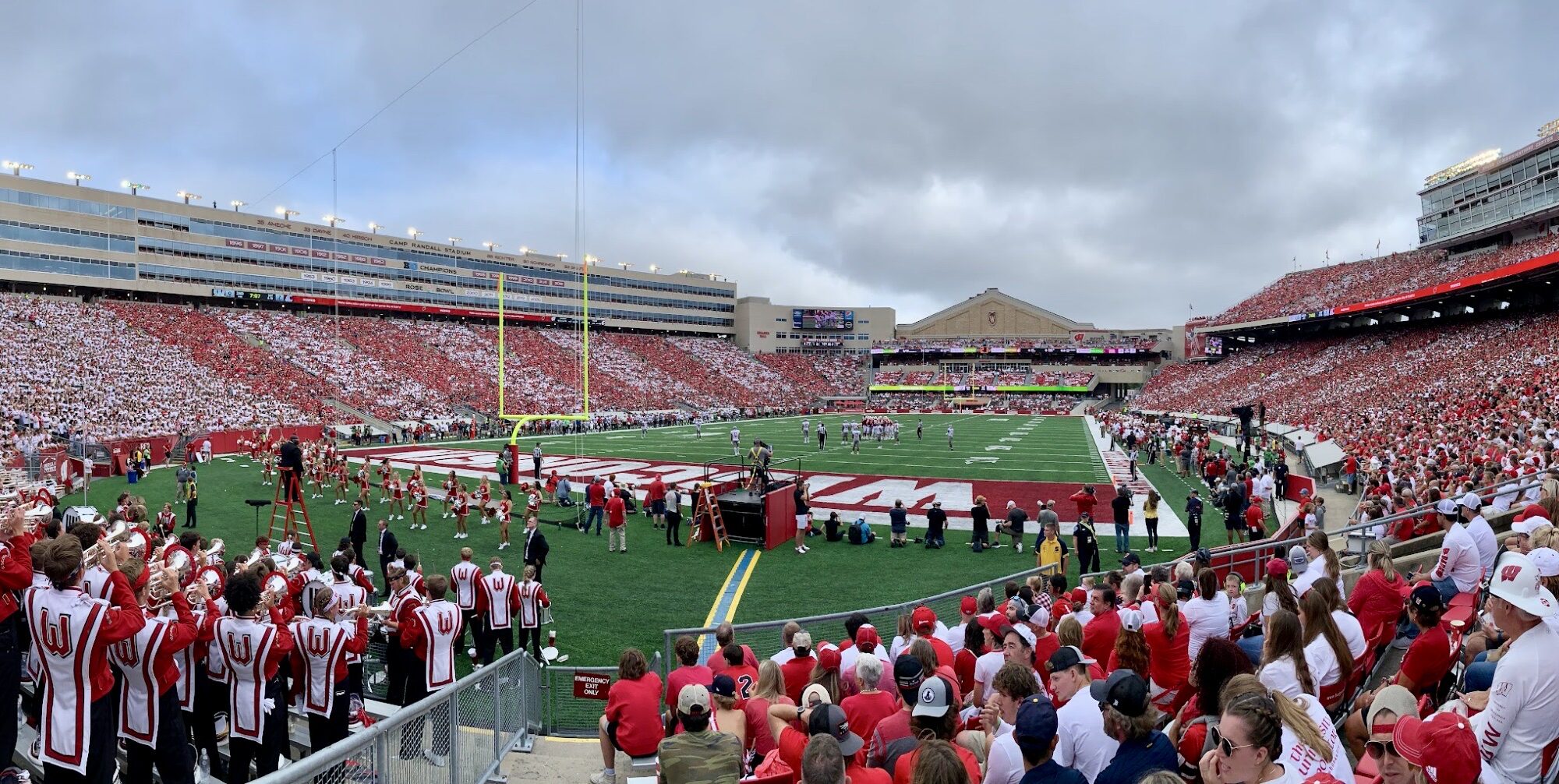 Often regarded as one of the Big Ten’s wildest and most thrilling venues, Camp Randall Stadium never disappoints. Once a Civil War training site, this massive structure is crammed in a beautiful residential area among dorms, fraternity houses, campus buildings and bars. The Camp is the perfect college venue with views of the state capitol and Madison’s surrounding lakes (Mendota and Menona).

The walk up Breese Terrace right before kickoff is electrifying as herds of red and white walk in the shadows of Camp Randall’s upper deck. The frat houses along this side spill over with college kids and extracurricular activity. As this side heats up, Regent Street is alive with sports bars crammed to the max. Nearby, the band performs their pre-game concert at Union South on the Randall Avenue side. From here, they march proudly into the stadium under the iconic Camp Randall arch while creating a path through loyal fans.

Once inside the stadium, the band fires up the crowd with its powerful and continuous high-stepping march.  “On Wisconsin,” greatly known as one of college football’s most recognizable fight songs, fills the air with passion and pageantry.  You might be lucky enough to get your own private rendition of the Badger fight song during the third quarter when the band splits up and plays to listeners around the stadium.

The fans in Madison are a zealous bunch. In particular, the student section adds flavor like no other. They provide the most timely, witty, bawdy and salacious chants that would cause many other student sections to blush. Their own brand of entertainment is contagious as “Build Me Up Buttercup” and “Sweet Caroline” reverberate through every slab of concrete when sung in mass unison.

Catch the wave as it rolls around the stadium in slow motion, fast motion, and reverse motion.  Between the third and fourth quarters, fans anxiously await the song, “Jump Around” by House of Pain. Known as one of college football’s most recognizable traditions, this tune causes the entire stadium to wildly leap sending seismic waves through the stands.

However, one of the most iconic gameday rituals at Camp Randall Stadium is the famous fifth quarter. Win or lose, the band floods the field and plays classics such as “Swingtown,” “Tequila,” and “Time Warp” while the fans polka and sing in the stands.

Spend a little time on State Street – a classic college drag. This street has it all from restaurants, bars, shops, and a stunning view of the state capitol. Enjoy a little time on the Memorial Union terrace with a beer, brat, and view of picturesque Lake Mendota.  There is a reason why USA Today voted Madison “the best college town in America.”  On a football Saturday, the energy is palpable as the town celebrates one of college football’s finest gamedays.