The Hoosiers have been winning the games they should win. In the competitive Big Ten East, it’s forgivable to lose to Ohio State, Penn State, and even Michigan State during their struggle saturated season. Indiana won all their non conference games, beat the lower echelon conference teams, and consequently have secured a bowl bid. With all this, though, wouldn’t it be nice to topple conference heavyweight, Michigan?
Spotlight on Bloomington for Indiana’s opportunity.

END_OF_DOCUMENT_TOKEN_TO_BE_REPLACED

“There will be a team that will come from nowhere and will have an outstanding year. We plan on that being us.” These were the words of Coach Lovie Smith at Big Ten Media Days this past July. Now, sitting at 2-4 including an ugly home loss to Eastern Michigan, one might wonder when that “outstanding year” will start.

END_OF_DOCUMENT_TOKEN_TO_BE_REPLACED 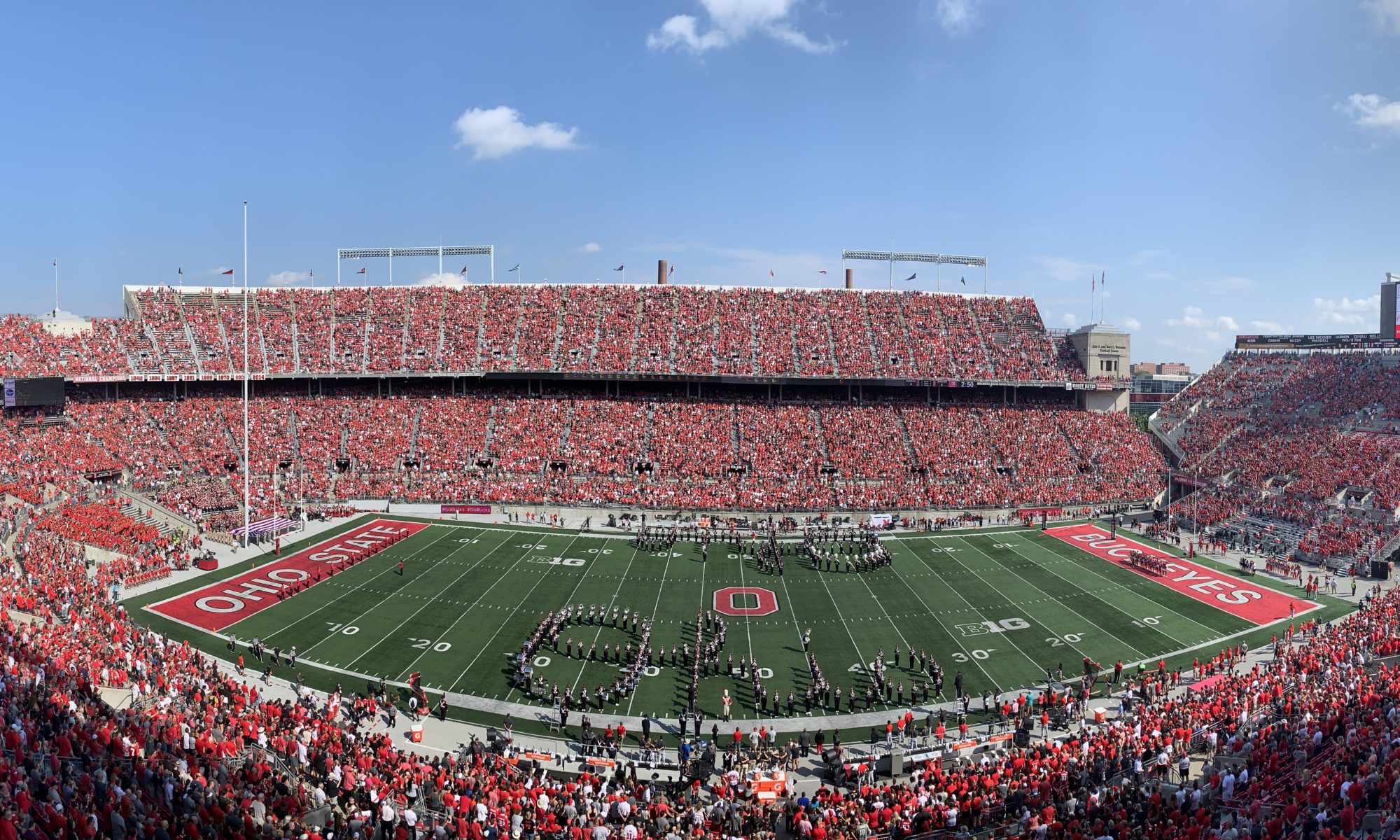 Fondly called “The Shoe,” Ohio Stadium ranks as one of the most colossal and intense sporting venues in the country. It’s dumbfounding just gazing at the vast amount of red and hearing the cranked up decibel levels of “O-H-I-O” exclaimed in unison.

END_OF_DOCUMENT_TOKEN_TO_BE_REPLACED

A tremendous defensive play resulting in a safety followed by an impressive field goal ending drive gave Miami (Ohio) a 5-0 lead over Ohio State early in the first quarter.
“We’re winning!” exclaimed a dumbfounded Redhawk fan.
Someone nearby echoed, “you better take a picture of the scoreboard now!”
That turned out to be good advice.
Ohio State won 76-5.
That early safety was one of two times that the Buckeye offense was truly stopped.
The other was the lightning storm that swept over Ohio Stadium, thus ending the game with just under three minutes to go.

END_OF_DOCUMENT_TOKEN_TO_BE_REPLACED

Two quick-strike rushing touchdowns from Charles Williams and a Chucky doll were the highlights for UNLV on Saturday. It was Northwestern’s moment to bounce back from a lackluster loss at Stanford two weeks ago. Clemson transfer QB Hunter Johnson scored his first career rushing and passing touchdown, thus injecting some hope into an offense full of questions. He did throw one interception, however, which prompted UNLV to introduce the world to Chucky.

END_OF_DOCUMENT_TOKEN_TO_BE_REPLACED

A little Wisconsin football history for you:

The Badgers used to really suck.
Tickets to a Wisconsin game were as sought after as a communicable disease. People would leave unsold Badger tickets on car windshields. Shamed football players shielded their letter jackets from view. The late eighties officially materialized Wisconsin’s tradition of being a doormat.
The program needed a major facelift, and the leaders at UW knew it. That is when Barry Alvarez strolled in as Wisconsin’s new head coach. Confidence. Toughness. Swagger. Adjectives that Badger football lacked, but that Alvarez had packed in his suitcase.
A handful of Big Ten and Rose Bowl championships later, the Badgers have become a consistent winner. Alvarez is now the athletic director helping to maintain this success.
I share this history because today’s 61-0 Wisconsin victory over CMU should not be taken for granted. There was a time when fans would come more for the band than the team, which made the retirement of its longtime band director such a momentous shift.

END_OF_DOCUMENT_TOKEN_TO_BE_REPLACED

This is a classic example of a place where sports dominate the entertainment category. Pre-game tailgating is fantastic, and the buzz on the streets in Iowa City is all about the team. Many fans point out visiting colors and start their battle cries and chants. Walking up to Kinnick Stadium, you see a beautiful brick façade that lines the outside. Rows of corn greet visitors to the main entrance along with a statue of Hawkeye hero and 1939 Heisman trophy winner, Nile Kinnick. The entire experience is midwestern perfection and one of the best college football stops in the country.

END_OF_DOCUMENT_TOKEN_TO_BE_REPLACED

I always get excited when I am able to put Kinnick Stadium on my schedule. I know I’m going to have an incredible day. Midwestern hospitality saturates the scene, and that was especially evidenced by the “Hawks To Go” tailgate whose members invited me in and showed me why they were named winner of the Best Hawkeye Tailgate Contest. My experience involved learning the history of the tailgate, which started in 2005. I also was taken on a tour of all the Hawkeye autographs on their trailer from all the Iowa greats that visited over the years. We took a shot to christen our visit to the tune of the I-O-W-A chant and received a pin commemorating the moment. As they inject all this passion into Hawkeye gameday, they have also taken in thousands of dollars in donations for the University of Iowa Stead Family Children’s Hospital. I felt blessed to start my gameday off in this way.

END_OF_DOCUMENT_TOKEN_TO_BE_REPLACED

The surprise of the Big Ten, Northwestern, took a rocky start to the season and transformed it into a Big Ten West title. Ohio State did what they do – reload and conquer. As Big Ten East champs, they were a heavy favorite to beat the Wildcats. A Rose Bowl prize awaited the victor as a packed Lucas Oil Stadium eagerly anticipated kickoff.

END_OF_DOCUMENT_TOKEN_TO_BE_REPLACED

The glint of the golden Irish helmets have not reflected off the light in Evanston since 1976. Notre Dame and Northwestern have met often in the past, but home games for the Wildcats were typically shifted to Soldier Field. The purple invaded South Bend four years ago and shocked the Irish in overtime. That same magical feeling was hovering over tailgates around Evanston and over Ryan Field as an undefeated Notre Dame team spilled out onto the Wildcats’ home field.