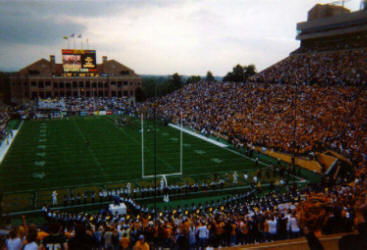 Driving into Boulder, Colorado is a memorable sight. With the Rocky Mountains to your left and the famous red tiled roofs of Colorado’s campus blanketing the city, you get a sense of something special. Set against the Flatirons, Folsom Field provides some of the best views in college football. Parking was a challenge, but once I was set, the tailgating atmosphere proved to be worth the parking fees.

END_OF_DOCUMENT_TOKEN_TO_BE_REPLACED

One Oklahoma debacle shy of being undefeated, the Longhorns visited. Boulder flaunting their weapons – namely quarterback Vince Young and tailback Cedric Benson. Even the live Buffalo that leads Colorado onto the field appeared intimidated by the strong Texas contingent and their all cowboy band playing “Texas Fight” on repeat. On yet another gorgeous day at Folsom Field with the autumn foliage outlining the Rocky Mountains, a raucous, yet wary crowd gathered to see if the Buffaloes had what it took to lasso the Longhorns.

END_OF_DOCUMENT_TOKEN_TO_BE_REPLACED

Everything came together nicely for Colorado’s homecoming game – perfect weather in the low seventies and an enthusiastic crowd. However, the Buffaloes neglected to schedule the traditional cupcake opponent. Instead, the undefeated and speedy Cowboys rode into town looking to spoil the day. Many fans, including the band, traveled from Stillwater to see their Oklahoma State team continue their winning ways. Our seats had us surrounded and devoured by energetic fans colored in proud orange.

END_OF_DOCUMENT_TOKEN_TO_BE_REPLACED

Every edge of every seat at Folsom Field would be worn thin by the conclusion of this heart-halting contest. For me, this game would complete a major first in my tour – watching two division one games in one day. Part one of the double header had Cal devouring Air Force in impressive fashion. Tonight’s game served up a heaping helping of hate as the green and gold and black and gold collided in every imaginable way. Flags staked in the ground bearing the CU emblem welcomed fans as they traveled up the Boulder Turnpike toward campus. The energy intensified as Boulder appeared framed breathtakingly against the Rockies. Tailgating and parking was as competitive as on the field action as fans crammed into the city and billows of smoke emanating from grills signaled the opening of a fresh season. Colorado students belted the fight song and interrupted themselves with harsh heckling of CSU fans that passed by. Dusk settled in and the stadium reverberated with anticipation.

END_OF_DOCUMENT_TOKEN_TO_BE_REPLACED

There was so much hype surrounding this game that fans may not have seen a blowout coming. Originally, this game was to be played during the day, but due to its attractiveness, ABC picked it up and used it as part of their Saturday night lineup. Even without Brent Musburger and ABC, the game had built in hype. Both teams were ranked in the top 25, it was the season opener for both teams, Colorado and Wisconsin were both coming off New Years Day bowl victories and once again, the game was at night. Electricity is high in Madison for every game. But, give the fans an entire day to party? Camp Randall was rockin’ and ready for this contest. Many teams are accustomed to having every game nationally televised. Wisconsin was just getting used to it and Barry Alvarez was the physician who breathed life back into the program.