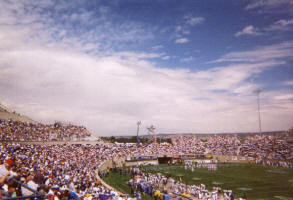 Air Force fans traveling along I-25 suddenly experience a traffic jam about two miles from the exit to Falcon Stadium.  The cause of the slow crawl becomes evident upon exiting as several military personnel guide cars down different pathways toward the game site.  Many security measures have been taken here and an escort by the Air Force is one of them.  Open spaces surround your journey to the stadium – all except for one large aircraft that greets you and points in the desired direction.

Once the parking lot has been reached, tailgating commences – rated one of the best in the country.  Just prior to kickoff, hundreds of blue uniformed recruits are dropped off and they march proudly into the arena.  As Falcon Stadium fills, fans enjoy the blue skies and semi-mountainous surroundings.  Eyes are soon directed skyward as a plane drops blue and white parachuted skydivers.  Each one carries an integral game item – first, the coin for the coin toss, then the game ball, followed by the American flag.  The Falcon mascot even makes his appearance from the endless blue.  Each diver aims for the fifty yard line and receives thunderous applause upon their landing.  With the focus back on the field, a special rendition of the star spangled banner begins accompanied by a hypnotic F-16 flyover.  It’s game time.  Throughout the contest, fans expose their spirit both for team and country as “Wild Blue Yonder” blasts from the band.  Being in the crowd cheering on a military school gives fans a sense of pride and puts football into perspective knowing that these players will compete on a far more challenging stage someday.