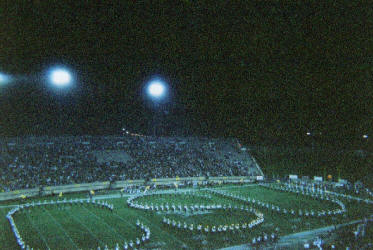 Hughes Stadium is set far from the campus of Colorado State in Fort Collins, Colorado. The setting is amazing as it rests up against the Rocky Mountain foothills. But, it sits all alone. Looking at it, you wouldn’t imagine that the stadium could provide such a wild atmosphere. Surrounding the stadium are acres of land used for parking. The scene is quite chaotic…much like a rock concert. Police pointing cars in all directions, vehicles bumping along on the rocky grass and drunken college students swarming the area. Night games are commonplace at Hughes Stadium, which only gives the student body more time to fill their student bodies with alcohol. The lawn outside the stadium is an all-evening party up to kickoff. The sun disappears behind the mountains and its game time.

Then, everyone climbs the steps into Hughes Stadium. Fireworks explode as the Rams take the field and the crowd is truly electrified. Fort Collins is a unique college town, and they sure get behind their team. The city is full of CSU banners and everyone is decked in green. It is a tribute to Mountain West football to see such a great turnout. Hughes Stadium is small, but the energy is as large as that of many major conferences. Cam the Ram mascot roams the sidelines as well as a real live ram. After each score, the band plays the fight song followed by a tricky drum cadence where the trombones juggle their positions up and down and to the side in such a timed way that they do not hit one another. The fans crane their heads around to see this circus trick. The rock concert continues after the game as cars slowly crawl out crunching beer cans underneath tires and dodging Ram fans cheering into the windows. The atmosphere surrounding Hughes Stadium is not well known, but after witnessing the craziness first hand, it definitely clears my top ten. Who else makes their team seem like the Rolling Stones?