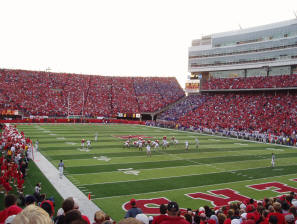 Nebraska fans are billed as being some of the most knowledgeable and respectful in the country. Memorial Stadium is noted as being a top ten stadium to visit on a college football Saturday. The stories about Nebraska’s devotion to their athletics are endless and after my experience in Lincoln, Nebraska, it can be safely said that these statements are absolutely true.

Knowledgeable? Ask any Husker fan about any team or any situation in football and they will answer you with both fact and a list of opinions. Respectful? No where in the country do the fans stand up and applaud the opposing team as they leave the field after the game.  Each team that visits Lincoln is acknowledged for their strong efforts. Devoted? The game I attended was Memorial Stadium’s 275th consecutive sellout, and over 90,000 Husker backers pack the stadium.

Nebraska football Saturdays are the most highly anticipated event in the state. When football games are not in session, Cornhusker fans sell out basketball, volleyball, and every other major sport where they can treat their withdrawal. “There is no place like Nebraska” as the fight song proclaims. Pregame activities include the band parading around town and major grilling contests in tailgating lots circling the stadium. The atmosphere is electrifying.

The energy continues postgame as the sea of red drains from the stands and seeps into local bars that celebrate late into the night regardless of victory or defeat. These fans deserve every moment they get to celebrate. The words that adorn the entry way to each gate around the stadium summarizes it simply, “Through these gates pass the greatest fans in college football.”