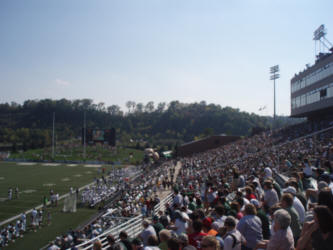 Peden Stadium in Athens, Ohio is another hidden gem of college football that few people know about. Only an hour south of Columbus, Athens appears as a cute brick laden college community, but only after the highway dwindles from three lanes, to two, and down to one. The campus is visible from the highway and as soon as the exit for Ohio U is reached, the stadium appears in the near distance. Tents lined up across the street and adjacent to the Hocking River host tailgaters that sprinkle the lawns with enthusiasm. Just a short drive from the stadium is Court Street – an all brick road brimming with fans weaving in and out of shops and filling up on novelties and gear for gameday. Ohio is known for its party-school status and traces of this were evident along Court Street.

Back at the stadium, fans await the Ohio University Marching 110. They create a pathway through the tailgaters and stop to play the fight song and a few other fun tunes. The Ohio band is extremely impressive. Not only are their musical abilities top notch, their kinesthetic and acrobatic moves are unique to most college bands. Wild gyrations and crazy dance steps aren’t strangers to this nutty bunch. They are a lot of fun and halftime is a big deal at Peden. The area around Peden Stadium is gorgeous. With high bluffs and trees surrounding the premesis, Ohio’s home is cozy and inviting. That is, until the team appears. Inside the stadium, fans await Rufus the Bobcat’s arrival through the inflatable cathead. He leads the team out by motorcycle sending reverberations throughout the crowd. Fans and players are pumped and the atmosphere is set. With every score, the band blasts the fight song and a canon is blown startling everyone in every corner. One end of the stadium offers a grassy hill where folks can lay out on and enjoy great views. Bobcat fans harbor an evident investment for their team, and although Peden Stadium is smaller in size, it is certainly not smaller in passion for their team.