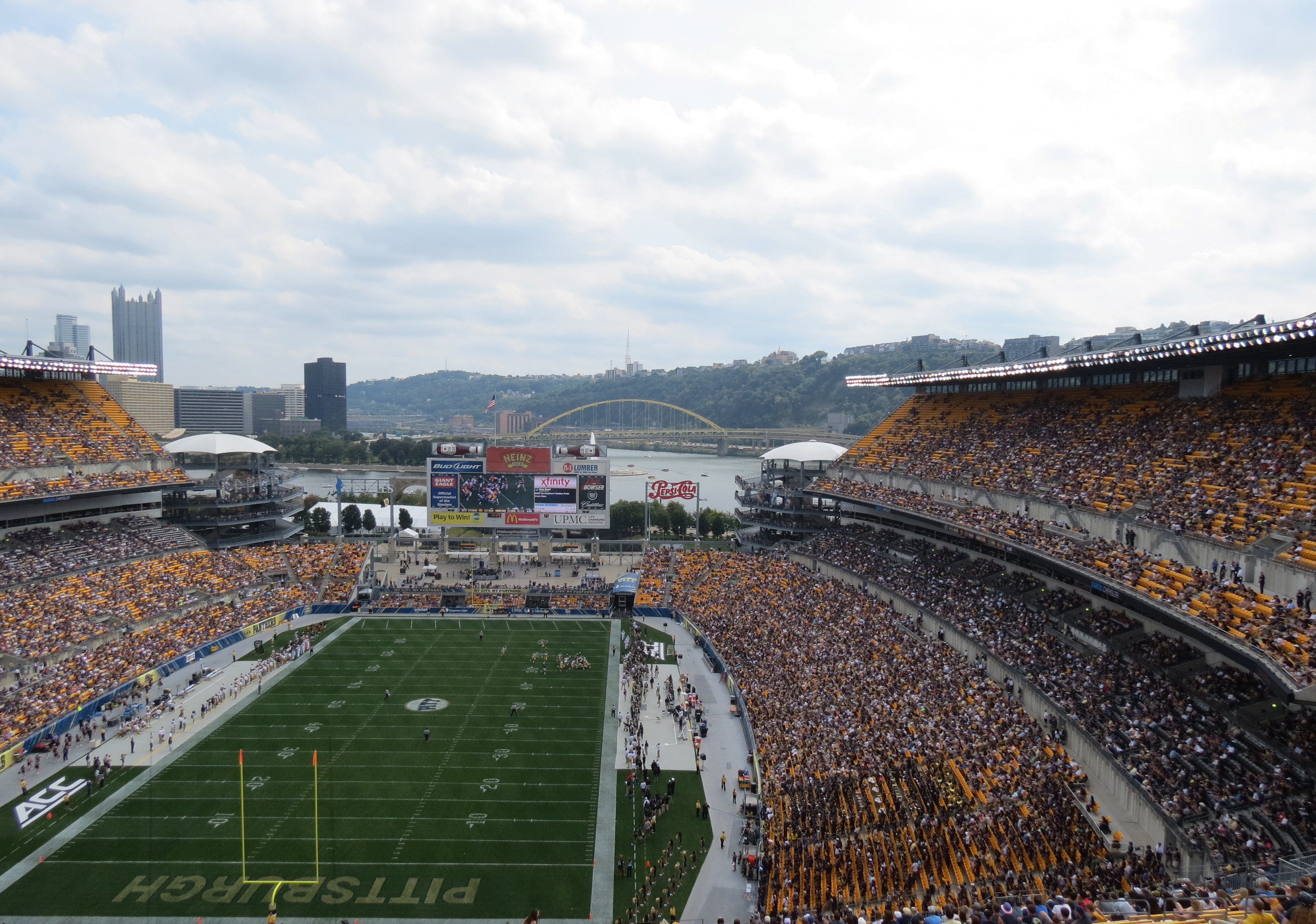 Heinz Field: Home of the Pittsburgh Steelers and Pittsburgh Panthers. Typically, I am fervently against universities that choose to play their home games in a pro stadium. Shifting the action off campus robs gameday of the authentic pageantry that makes college football special. However, Pittsburgh makes it work. The Panther football program has enough tradition, fan following, and connection with the city to keep the Pitt magic alive.

But, checking out campus on gameday is still a must. Drop by William Pitt Union and catch some of the sights and sounds before the students load the buses and roll to Heinz. Rubbing the nose of the panther statue outside the union is considered to be good luck – most use its powers to lure a Pitt victory.

I was pleased to see a strong Pitt presence upon my arrival at Heinz Field. It’s not all about the Steelers. Pitt flags adorn the outside of the stadium as well as another luck-bearing panther statue. Carved out of the steel gates at each entry are the words “Steelers” and “Panthers” which indicates a true sharing of this home. In other words, it doesn’t feel like Pitt is just borrowing or renting Heinz Field.

All that being said, this place is gorgeous. Rising high above where the three rivers meet, Heinz Field (formerly Three Rivers Stadium) is an icon in Pittsburgh. Enveloped by wading boats, downtown’s skyline, and the Allegheny Mountains, this is a proud venue to call home.

Loyal Pitt fans surround Heinz Field on gameday with anticipation.  Tailgating floods the surrounding parking lots while the Pitt cheerleaders and Roc the Panther work the crowds.  The Pittsburgh marching band signals that kickoff is near as it makes its traditional march into Heinz Field surrounded by an anxious throng of blue and gold clad fanatics.  The stadium may not have that authentic college feel, but the fans pull a wealth of campus fever into downtown.

One of my favorite moments is the singing of “Sweet Caroline” between the third and fourth quarters.  Okay, lots of places sing this song.  But, instead of screaming “BA BA BA” after the Sweet Caroline lyric, Panther fans belt out “LET’S GO PITT!”  And it’s not “Good times never felt so good – SO GOOD!  SO GOOD!  SO GOOD!”  Rather, its “GO PITT!  GO PITT!  GO PITT!”  The whole stadium chimes in at these moments, which brings that special ingredient that unites a fan base beyond just the fight song and alma mater.

In 1999, the old Pitt Stadium was demolished to make way for the time share at Heinz Field.  But, as I sit amongst these loyal Panther backers, I get the sense that these games could be played on the moon and the passion for Pitt football wouldn’t diminish.