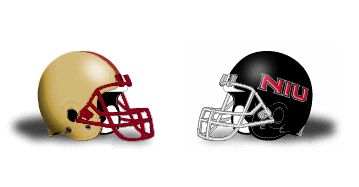 #BlackoutBC was the battle cry in DeKalb on a Friday night opener for Northern Illinois’ tussle with Boston College.  Decked in black, Huskie fans flanked both sides of Huskie Stadium to kickoff Labor Day weekend with some serious tailgating.

On one side, a fraternity-infused party was ignited with bar stool antics and sophomoric frivolity.  On the other side, a more family friendly environment took place with decked out cars and tents.  The Huskie Marching Band came rolling through to entertain with traditional campus tunes and the fight song. Victor E. Huskie stopped for photos with fans while cheerleaders added to the pageantry.  The stage was set and college football was back.

Rarely does a team from a power 5 conference visit a MAC venue, so this game had added value for NIU.  The stands filled for what would turn out to be a outstanding matchup.  The late kickoff gave attendees plenty of time to gather anticipation and fuel their tanks.

Boston College took a 20-10 lead in the third quarter, and while the Huskie defense was playing well, it seemed like their ACC foe would slowly chip away at the clock.  But, Northern Illinois would fight back tying the game at 20 in the fourth quarter.  A late field goal by the Eagles would break the tie, thus giving them the 23-20 advantage.

It wasn’t over.  Kicker Christian Hagen had a shot to send it to overtime.   As the play developed, it turned into one of those slow motion, retrograde zoom movie moments.  Hagen kicked the ball solidly but it sailed low.  A Boston College defender got a fingertip on the football sending it on a tumbling trajectory, but still heading toward the goalposts.  The lowriding pigskin looked as though it would clear the crossbar – until it met metal with a clunk.
The ball fell lifelessly into the endzone, and the stadium began to leak with fans like a mulitholed funnel.

A chilly evening in DeKalb started with fanfare and festivity, and ended with dread and disappointment.  Boston College fans weren’t exactly feeling boastful, though.  A three point takedown of a struggling Huskie team isn’t exactly the path toward a championship.

But, thankfully, college football isn’t all about wins and losses.  The atmosphere alone can draw excitement, and while successes on the field can enhance it, collapses don’t erase it.