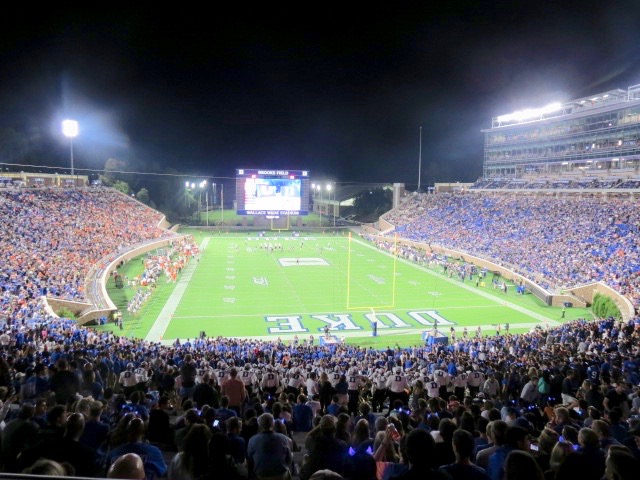 Let’s face it. Duke is known for basketball. Cameron Indoor Stadium gets all the national attention for being a bucket list arena for college sports fans. However, don’t overlook the history and charm that built Wallace Wade Stadium, a landmark on campus for which Blue Devil fans show great pride.

Built in 1920, Wallace Wade Stadium housed some historic teams in the 1930s and 1940s. There were lean years, lots of them. But, bright moments dot the timeline. Steve Spurrier recharged the team in 1989 with an ACC title. Fred Goldsmith brought the Blue Devils to a New Year’s Day bowl game in 1995. Coach Cutcliffe has led Duke to an ACC coastal title and appearance in the ACC title game.

The stadium itself has been renovated with impressive amenities. It has kept the same structure, however. Pictures of this stadium from its birth look much like it today. The old arena has aged well.

Arguably the most fascinating historical aspect of Wallace Wade Stadium is the fact that it hosted the Rose Bowl in 1942. It was “the day that would live in infamy” that changed the course of the Rose Bowl that year. The surprise Japanese attack on Pearl Harbor on December 7, 1941 raised concerns that more attacks on the west coast would be imminent. Consequently, the Rose Bowl was canceled.

Duke lost to Oregon State on a cold and rainy New Year’s Day in 1942, and many of those players enlisted to fight in World War II. It became more than just a game that year, and this stadium has a piece of history that will always be known as the Durham Rose Bowl.

Inside the stadium, there is a plaque commemorating this unique moment. Surrounding the plaque is a small rose garden and a bust of Wallace Wade, who coached the team that year.

While history is hard to replicate, excitement for Duke football is still alive on campus today. Fans gather a few hours prior to kickoff to cheer on their Blue Devils as they file out of buses and make their walk toward the stadium. The band, cheerleaders, and Blue Devil mascot add to the pageantry of the moment and help to make royal blue the color of the day.

With many other teams in the state to forge rivalries with, North Carolina is just as hated on the football field as it is on the basketball court. The Victory Bell is their shared trophy and the winner spray paints it to match their particular shade of Carolina or Duke blue.

While Duke might not be the first team that enters your mind when it comes to college football, their history and tradition is alive and well in Durham. The beautiful campus and electric spirit make it a worthwhile trip – even when basketball season is over.