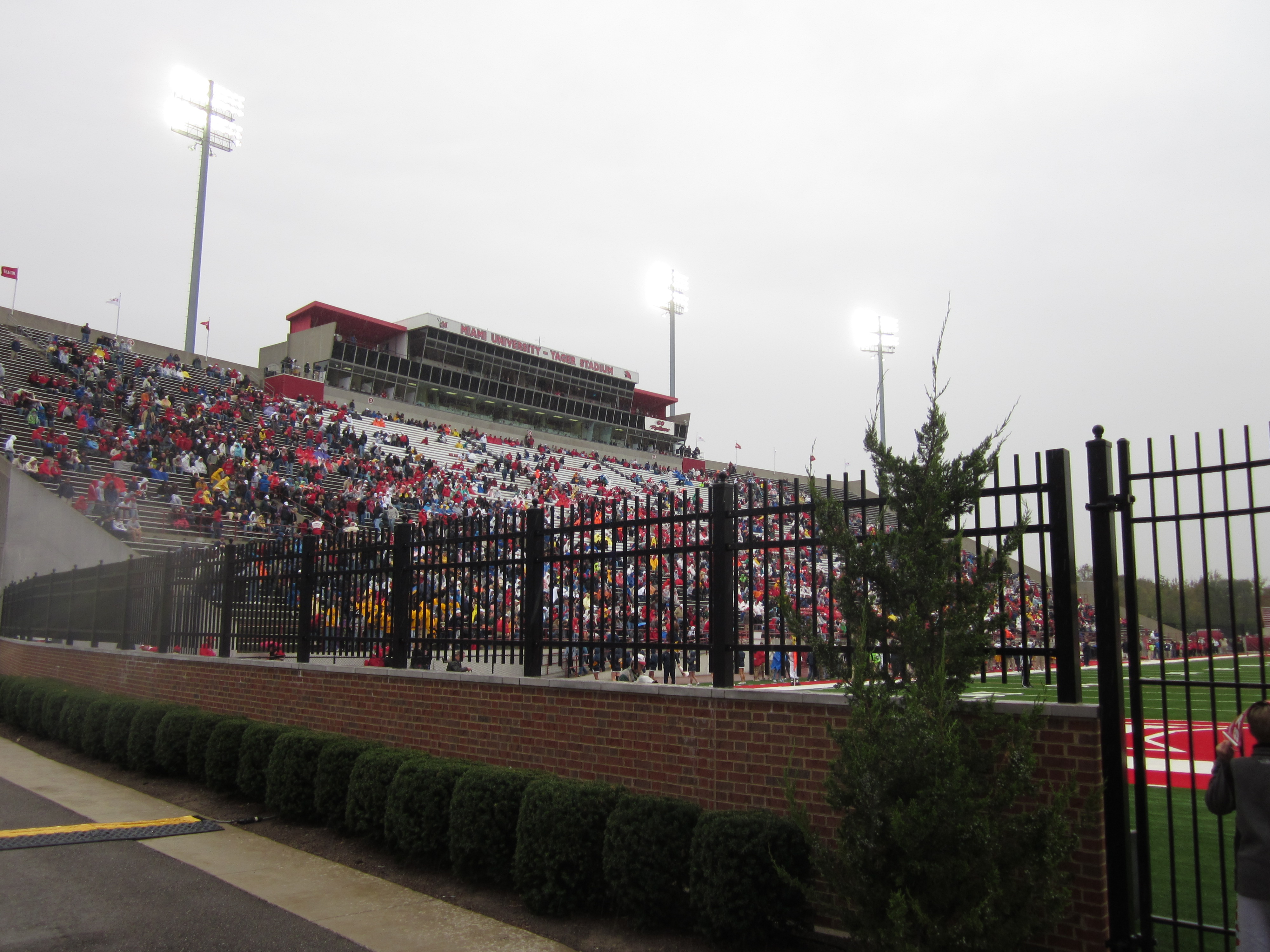 Lost amongst the farms and forests of western Ohio lies Yager Stadium. If Highway 732 is chosen as the route to reach this destination, you might feel lost yourself.

A limited amount of signs provide hope that Oxford is approaching. However, after meandering through a labyrinth of scenery fit for Robin Hood, signs indicating an afternoon of pigskin begin to appear.  Hope turns into wonder as a slight opening in the trees appears to the left ahead. Sure enough, it opens suddenly to Miami’s sports complex with Yager Stadium sitting at the center of attention and Oxford’s beautiful campus with brick lined streets and charming buildings.

But, the stadium itself is surrounded by an army of trees. This is one of the prettiest settings for a college football game – especially as the leaves begin to change. Known as the “Cradle of Coaches,” Miami has had some famous faces pacing the sidelines including Woody Hayes, Bo Schembechler, Ara Parseghian, Jim Tressel, and Randy Walker. There is a strong sense of tradition at Miami and these former coaches helped to build that.

Miami has its devoted fans and treasured traditions.  The Hawk Walk gets gameday rolling as buses arrive that release the team into a bevy of fans, cheerleaders, and band members. It is clear that this place holds a passion for its RedHawks. Many fans still chant “Let’s Go Redskins” to honor the previous team name – ya, there is some tradition here. Despite changing the name at the request of the Miami tribe, the university has added a new heritage logo that honors the culture of the tribe for which the university is named.

Inside the stadium’s main entrance, statues stand tall to honor each of the legendary coaches who launched their career in Oxford. Fans take pictures of and with these statues – there is a lot of pride for the Cradle of Coaches.  Fans file into Yager to watch their beloved Miami team.  The band and fans celebrate the fight song and alma mater before kickoff and Swoop, the team mascot, leads the Redhawks out onto the field.

Classic college football ensues as the game progresses with cheerleaders, bandmembers, and mascot leading the fans in the sounds of gameday. The  oversized bell behind one endzone sounds at each score, which reverberates throughout Yager. The fans equally sound their excitement throughout gameday in one of the Middle American Conference’s most classic venues.