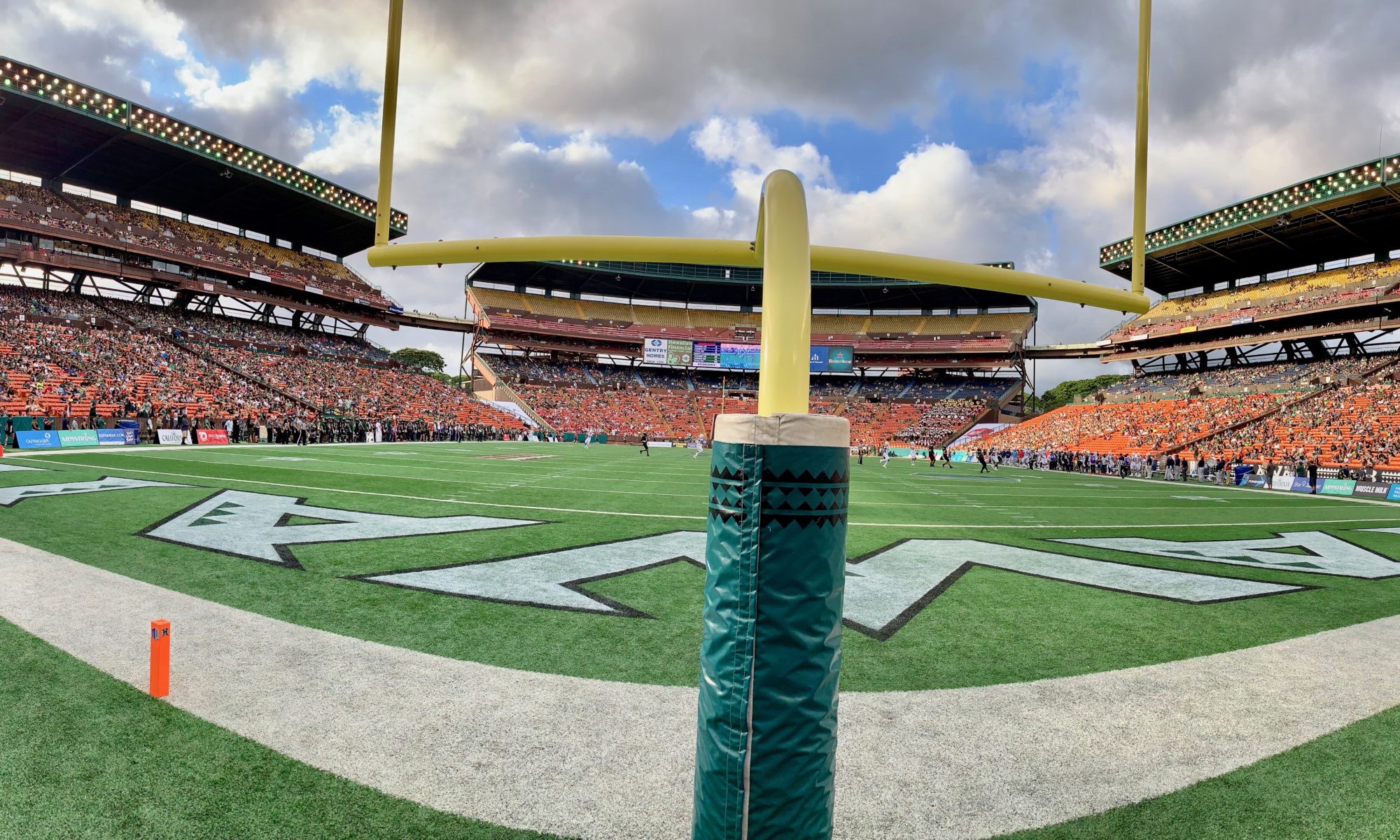 “Live Aloha” is a mantra that is intended to be a way of life in Hawai’i. This is equally true for the team and fans of the Hawai’I Rainbow Warriors. While “Aloha” is a welcoming greeting, its truer translation means love, peace, and compassion. The players work hard and the fans cheer hard, yet all is done with the spirit of aloha.

During pregame outside Aloha Stadium, fans fill the parking lot with a level of tailgating, pomp, and pageantry that could rival many locations on the mainland. Geographical remoteness does not equate to a cultural setback when it comes to college football. Yes, many potential fans that could fill the empty parking spaces may choose Waikiki Beach or Diamond Head for their Saturday afternoon entertainment. That’s the cost when your team is situated on one of the most gorgeous islands on the planet. But, the thousands of fans that gather inside Aloha Stadium make their passion count. It’s palpable.

Upon my arrival to Aloha Stadium, I was a bit disappointed to learn of the discontinuation of the traditional Haka or Ha’a dance that the players perform during pregame. The Ha’a (the Hawaiian version) is a warrior dance brimming with history and culture that instills pride for many on the islands. It also carries the intention to intimidate the opponent. Some controversy surrounding the ritual could have caused the tradition’s demise or perhaps it simply ran its course. In case it ever returns to the gameday scene in Honolulu, I have posted a video of the Haka here:

For a team whose land didn’t become a state until 1959, Hawai’i football is filled with spirit and tradition. They’ve been playing since 1909, when they were known as “The Deans.” In 1923, Hawai’i scored a huge upset over Oregon State and a rainbow formed over the stadium. A reporter noted this, and the team changed their moniker to Rainbow Warriors. It was even said that if a rainbow were to form on gameday, Hawai’i couldn’t lose.

Along with Aloha, the thumb and pinky extended is another key symbol of the islands. Known as the “shaka,” it’s often associated with “hang loose” and a surfer lifestyle. It embodies the laidback nature of the islands. But, in Aloha Stadium, it is also a cheer symbol that unifies and connects the fanbase. Throw up a “shaka” for “hello” or “awesome” or “yay”!
It’s another part of the island culture that has become a gameday staple.

Rainbow Warrior football may not be the first thing that comes to your mind when you think of the Hawaiian islands. But, don’t underestimate the volcanic passion that drives this team and fanbase. As one fan simply said, “I wouldn’t trade this team for any in the world.”