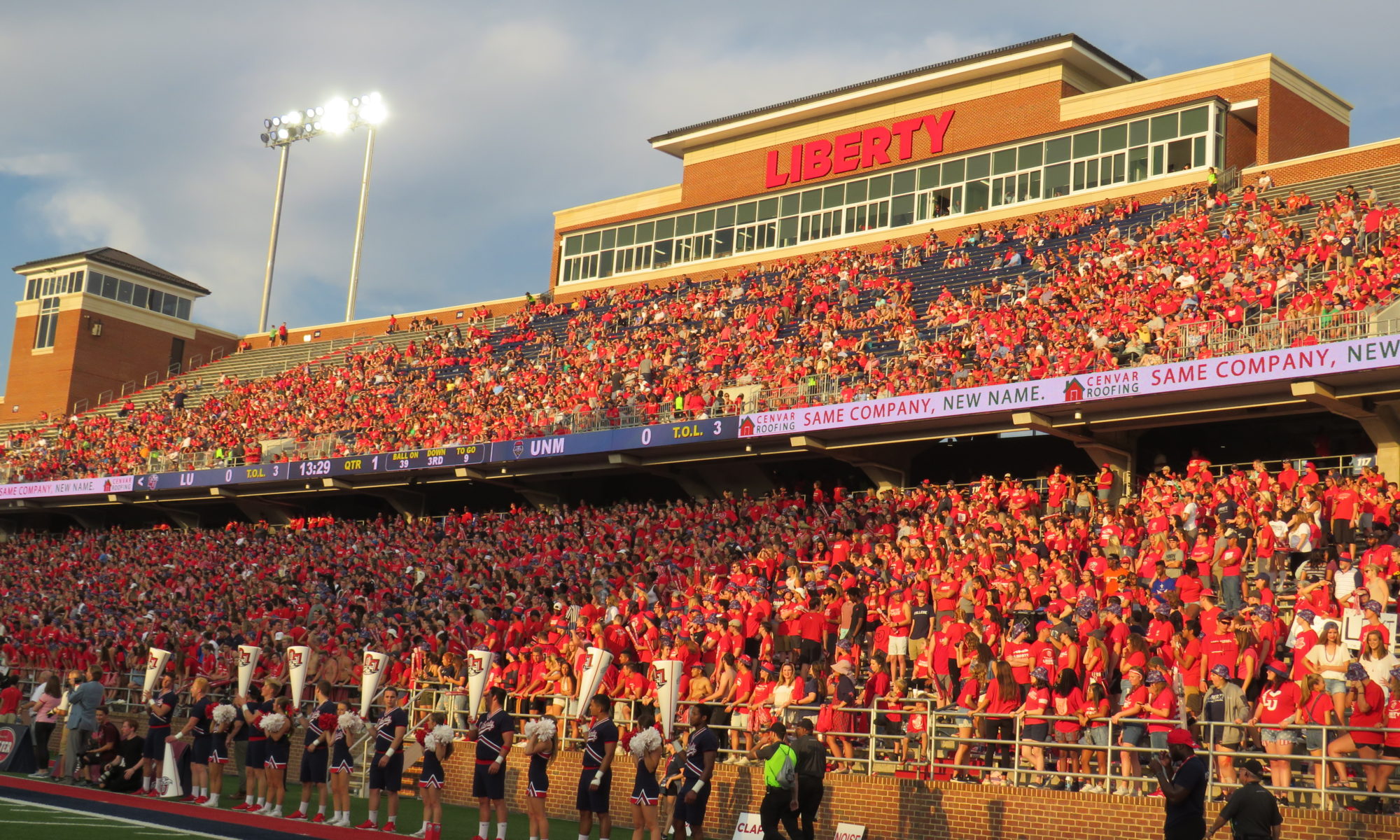 For a university that wasn’t in existence when Bo and Woody began their ten-year war in 1969, Liberty has the gameday experience figured out. It’s an atmosphere that is uniquely their own and embodies traditions that have taken strong roots. Its prosperous run as an FCS member in The Big South Conference has transitioned them smoothly into their current position as a budding force in the FBS.

Lynchburg, Virginia is located in the center of the state and is home to the crown jewel amongst evangelical universities. Liberty football began in 1973 as an NAIA member and rapidly rose to FBS status. Dr. Jerry Falwell, Sr. founded this university based in Christian faith and after his death in 2007, the “71” flag (the year Liberty was founded) flies proudly over the stadium in his honor.

Being deeply planted in Christian faith, it’s no surprise that the power of prayer pulsates throughout gameday. Pregame warmups involve prayer huddles, postgame focuses on a fifty yard line prayer of thanks, and shortly after the national anthem, all of Williams Stadium collectively prays in unison ending with a rousing “Amen.” It’s a distinctively unifying tradition at Liberty that divinely weaves their culture into the gameday experience.

Campus perks up as game time approaches with Liberty cheerleaders and mascot, Sparky igniting spirit within an already exuberant fan base. The “team walk” puts an exclamation point on pregame as Flames fans welcome their football team into the stadium.

Once inside Williams Stadium, it quickly becomes evident that venues don’t have to be in the 100,000s to be raucous and spirited. Led by a creative student section decked in everything from chest paint to kilts, their interaction with the game rivals many major school’s crowds.

Jerry’s Jokers are the epicenter of these fanatics. Named after the school’s founder, these devoted Liberty disciples charge into Williams Stadium early to prepare, paint, and clone the Joker, as known from Batman fame. An overwhelming representation of villains congregate only a few feet behind the opponent bench firing insults and intimidation toward their foes. Unrelenting from coin toss to final gun, Jerry’s Jokers embody the “Four Quarters of Fury” that Liberty inspires out of the crowd.

The Spirit of the Mountain marching band saturates the air with a show stopping sound as the red clad fans cheer on with pride. Flames, fireworks, and light shows add a further element to the ambiance, but pyrotechnics aren’t needed to jolt the jubilance in the stands. Fan fervor flows over from FCS success helping Williams Stadium and Liberty football to blend effortlessly into the next level.