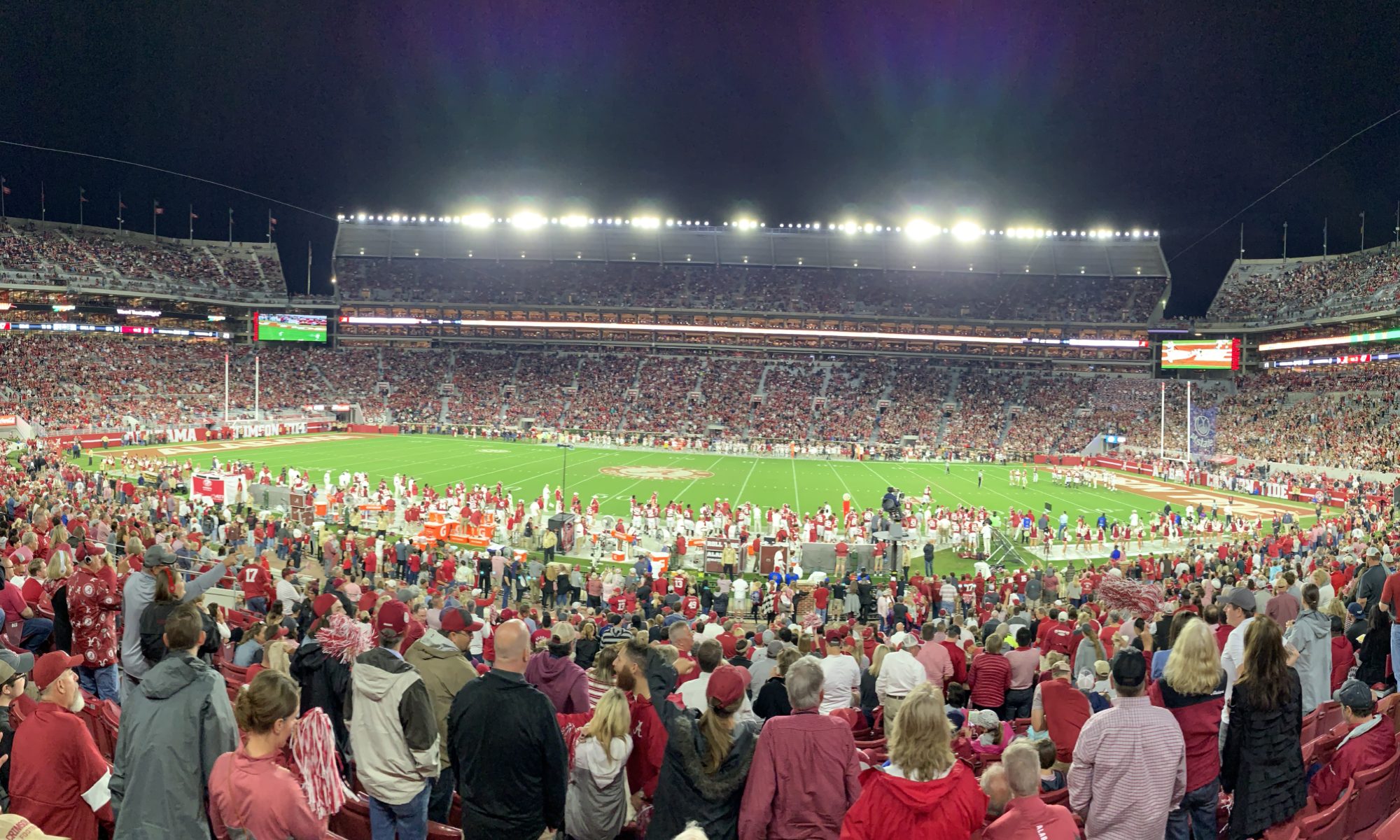 Alabama football breathes in these adjectives as they have secured themselves as a championship-devouring machine. Such success consequently translates into a loyal Crimson Tide fan base and top-notch college atmosphere.

A visit to the Paul W. Bryant museum offers a great first stop when arriving in Tuscaloosa on gameday. This shrine to Alabama football history is dripping with trophies and memorabilia showcasing one of college football’s most iconic programs. The massive influence of coaching legend Paul “Bear” Bryant makes him a focus of this museum, especially since traces of his legacy are evident throughout the gameday scene.

If there were such a thing as an official school pattern, houndstooth would be it for Alabama. Long associated with Coach Bryant for wearing his famed houndstooth hat, this black and white repetetive design can be seen integrated into Alabama gear all over campus on gameday. From ball caps to boots, and skirts to shirts, the houndstooth pattern is ubiquitous and classically tied to the Tide.

This collection of houndstooth and crimson will gather at the stadium’s entrance for the pregame team walk. With the extreme amount of national championships to Alabama’s name, “The Walk of Champions” is the best title for this tradition. Thousands of fans welcome their team with joyous cheers and countless repetitions of “Roll Tide!”

From the “Walk of Champions,” fans scurry through hoards of campus tailgating as they follow band members and cheerleaders over to “The Elephant Stomp.” This pregame band concert provides the best opportunity to take in Alabama’s Million Dollar Band and beloved mascot, Big Al. From “Yea Alabama” to “Tusk,” this band flashes its might as entertained fans absorb the sounds of gameday in Tuscaloosa.

The stadium itself is nothing short of intimidating. Sounds of “Sweet Home Alabama,” “Roll Tide,” and “Dixieland Delight” fill the air contributing to the southern flair of Crimson Tide football. Alabama blends a unique set of traditions with a certain fervent fandom that puts formidable force behind their battlecry, “Rammer Jammer, Yellow Hammer, Give ‘Em Hell Alabama!”