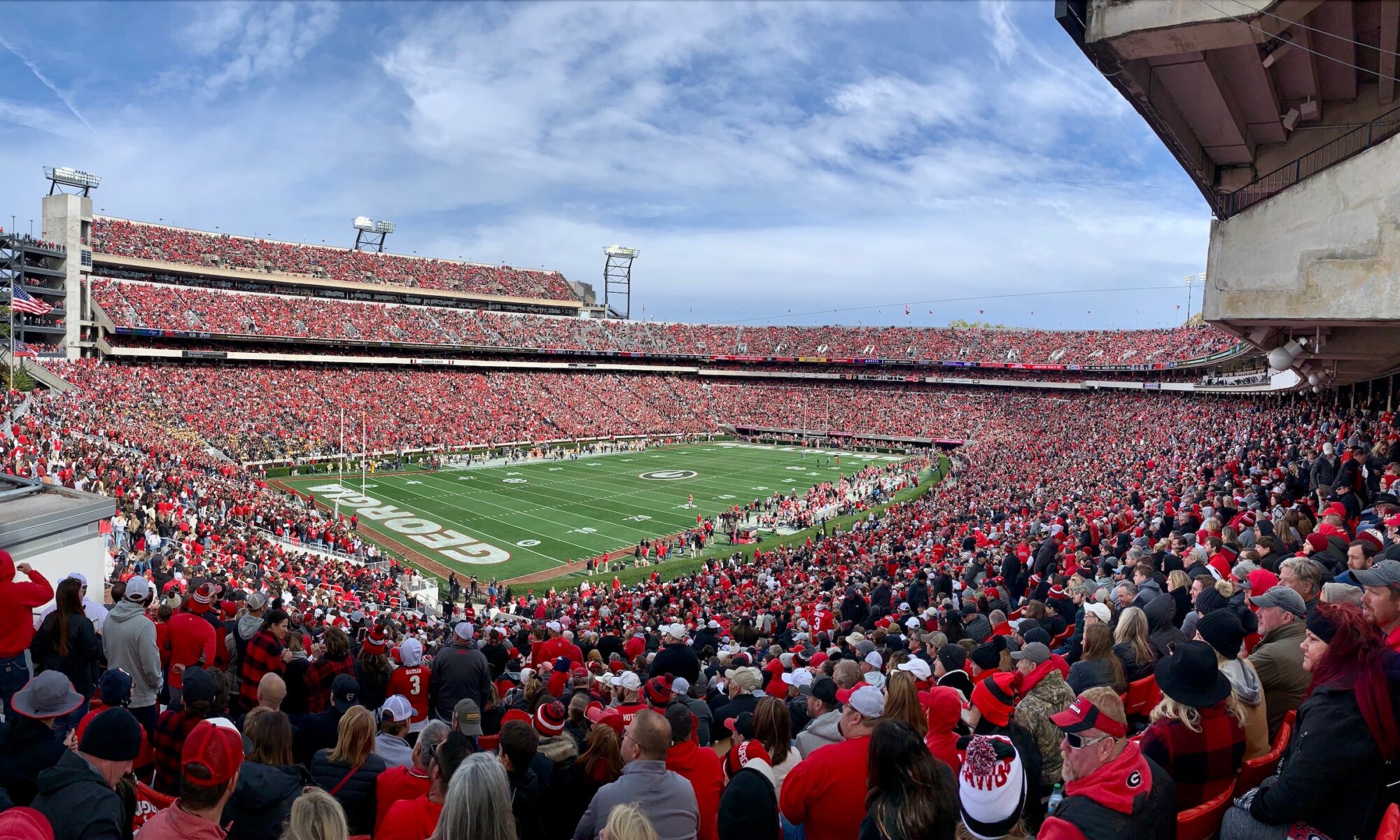 Quintessential gamedays are characterized by gorgeous settings with iconic on-campus stadiums. Passion and pageantry are on full display with traditions that cross generations. Vibrant downtowns adjacent to campus strengthen the community and keep the energy level running high on a football Saturday.
Athens, Georgia checks all of these boxes.

Sanford Stadium is sunken a bit into the hilly terrain of campus. But, seating over 90,000 spectators, it stands out as one of the most cavernous. As kickoff nears, the stadium becomes surrounded by tailgating parties all decked in red and black. A couple hours prior to the opening kick, massive crowds converge upon the main entrance of the arena to view the highly anticipated Dawg Walk. Fans eagerly form a path and await their Georgia Bulldogs as they make their pregame entrance. The mascot, Hairy Dawg, along with the spirit squad, entertain as the Georgia Redcoat Marching Band saturate the air with the sounds of “Glory, Glory.” It’s the kind of spectacle that only college football can provide.

As Sanford Stadium fills to capacity, a powerfully solemn moment envelops the crowd as the brass notes of the “Battle Hymn of the Bulldog Nation” pierce the air from a lone trumpet high in the upper deck. It’s a rare quiet moment on gameday that stirs pride among the Bulldog faithful.

The Call of the Dawgs triggers pride in a more audible fashion. Pregame kickoffs are accompanied by a crowd in unison hollering “GOOOOOO DAWGS! SIC ‘EM! WOOF! WOOF! WOOF!” It becomes an instant unifier for Bulldog fans on gamedays and beyond. It’s particularly intimidating when shouted from the UGA Spike Squad, a collection of red and black painted rowdies donning spiked shoulder pads and a devilish flair.

Focus on the sidelines for more traditions including UGA, Georgia’s white English Bulldog mascot that has been a legendary fixture on gamedays since the 1950s. A mausoleum within the stadium has become the final resting place for all previous UGAs. The perimeter of the field is surrounded by lush green privet that has had its roots in Dooley Field since 1929. It has earned Sanford Stadium the moniker, “Between the Hedges.”

The fanfare and festivities spill out into downtown as Athens offers one of the most exuberant restaurant and bar scenes in college football. Georgia is a prime example of why college football is so electrifying – the sport is not just defined by the 60 minutes on the field. The entire day pulsates with rich tradition and a colorful spectacle that ignites an unmatched level of fervency.