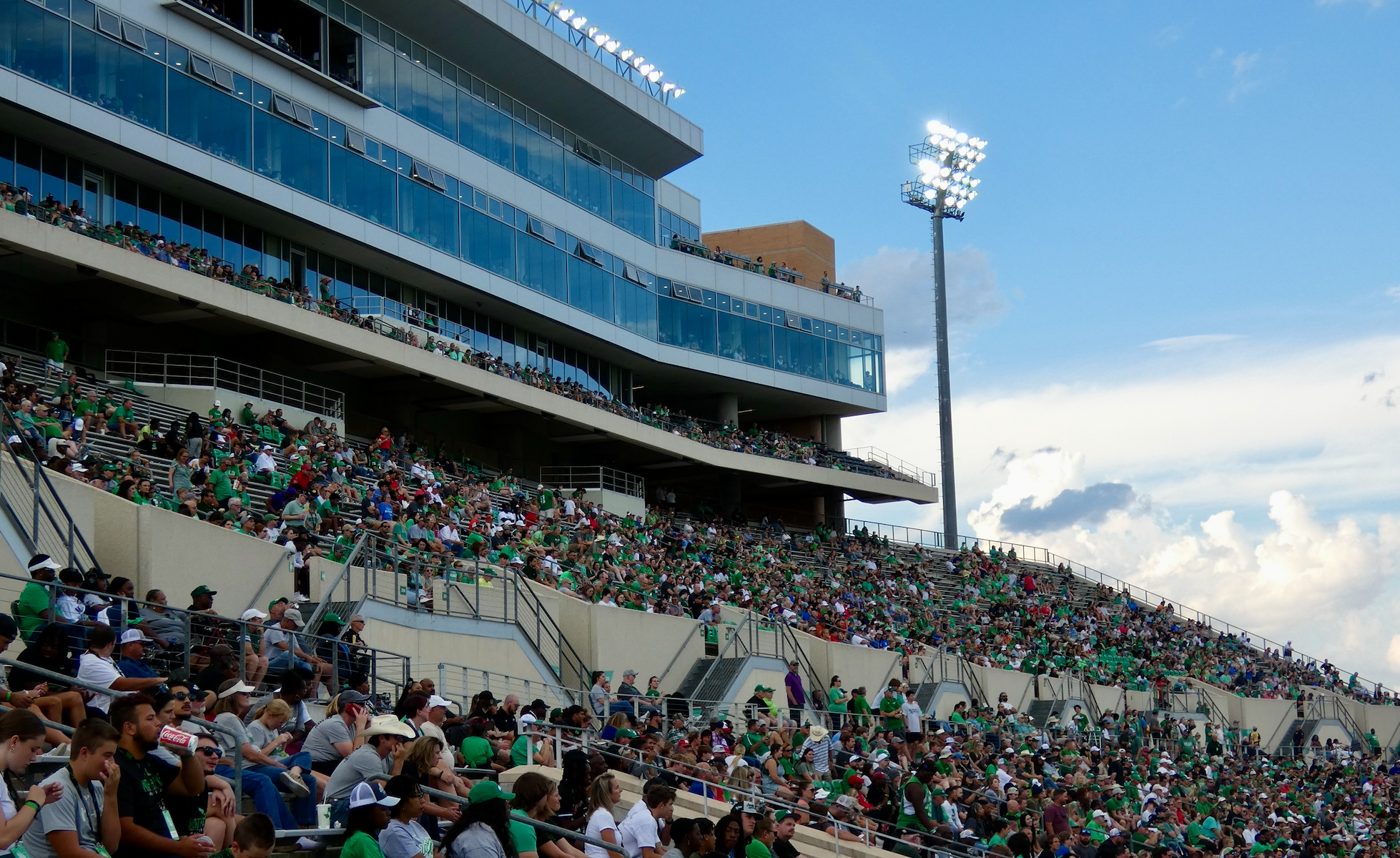 Denton, Texas is situated just 40 miles from Dallas – home of the North Texas Eagles – better known as the North Texas Mean Green. UNT is relatively new to the major college football scene, and they have adapted remarkably. They joined FBS in 1996 and a few years later came a sparking new stadium. The traditions that color gameday in Denton are phenomenal making the home of the Mean Green a colorful thread in the fabric of college football.

Tailgating and pregame revelry kicks off gameday outside Apogee Stadium. Celebrations are blissfully interrupted by the Mean Green March that parades through fan filled tents. Scrappy the mascot, lines of colorful cheerleaders and the sounds of the Green Brigade lead the football team to the stadium through a line of cheering fans. There are few better ways to start a gameday.

Inside Apogee Stadium, the team emerges onto the field with each player touching the beloved Spiriki statue.  With this entrance, prepare your eardrums for an explosion from Boomer the Cannon. This Mexican-American war replica continues to blast after each North Texas score sending a jolt of energy into the air and through the green-clad fanatics in the stands.

The marching band, known as the Green Brigade, is a powerful force whose sounds rattle the bleachers. Every marching step and instrumental note praise the passion of UNT. Their pride is palpable, and they are an iconic part of this place.

An old 1929 Ford Model A Tudor Sedan, known as the Green Machine, looks over the field and has become an icon at UNT football games. It’s a manifestation of the Mean Green spirit. That spirit inspired their nickname. Once called the Eagles, the Mean Green officially adopted their current moniker in 1966. It was intended to be a cheer to support the defense, but the name grew popular and became emblazoned into North Texas culture.

Mean Green spirit is effervescent on football Saturdays in Denton. A victory results in nearby McConnell Tower being illuminated in a bright green glow. With the fight song blaring, Scrappy entertaining, spirit squads cheering and Boomer blasting, North Texas gamedays are infused with an undeniable tradition and passion.